Supercars, have we gone full circle?

In 2018 a number of long term decisions have been made in the Supercar scene - some from the manufacturers, some from the teams and some from the administrators of the sport itself.
It goes without saying that the Supercar landscape has changed and there is no going back to an EB Falcon or a VP Commodore.

For 2019 we will see the addition of the Mustang confirmed a few weeks ago by Prodrive Racing Australia. Given Holden's slump in Commodore sales, logic would suggest an announcement from a Holden satellite team considering a Camaro is a mere formality. Clearly the Mustang and Camaro are our future for Australia in terms of Muscle performance vehicles so having them in our top tier of Australian Motorsport is of no surprise.

The new renditions of the Mustang on the outside look very similar to what we currently see in the North American Trans-Am series in particular the TA2 cars. In fact when you look at the TA2 specs they resonate with the Supercars with only engine and transmission configuration differences. Both forms require a mandated tubular chassis "draped" with a composite replica body and in most cases supplied from a small number of vendors. TA2 engines like my self acclaimed Australian cousin require Fuel Injection and although they run more cubic inches they use restrictor plates keeping their horsepower to around 500HP. One big difference is the choice of transmissions - in Supercars they use a rear transaxle however in TA2 the use of a traditional engine mounted 4 speed transmission is mandated.

Clearly a number of Racers and Trans-Am 2 Muscle Car Racing Management have seen TA2 on it's merits and debuted an Australian Championship in 2017, aptly named the TA2 Muscle Car Racing Australia - http://ta2racingaustralia.com/. TA2 Australia has a 6 round championship (plus one non Championship) that covers most of the East Coast of Australia. Should the Supercar administrators be looking over this Championship and mandate TA2 rules (or even TA for that matter) and consider the possibility of mandating those cars in our next generation?

That suggestion probably sounds left of field. Given the investment Supercars have made in Gen 2, I understand that dropping it 18 months into it's tenure sounds outlandish. Given we went from Car of the Future (COTF) regulations in 2013 and welcomed Volvo, Nissan and Mercedes into our sport then in the space of 5 years have the same marques depart, one would suggest that Gen 2 is not seen as an attractive proposition. From the outside TA2 appears to be appealing from a cost control point of view and the supply of vehicles, spares and accessories is not as cost prohibitive as our current Supercar inventory. It would be interesting to know what the current stake holders in the sport think of such a change?

This brings me to my next point, back in the late 60's, argueably the infancy of the Australian Touring Car Championship we had a cross pollination of classes and it was common practice to use a modified Trans-Am car of the day in the Championship (with the exception of Bathurst). So in short we had Mustangs and Camaros running around and quite frankly dominating the podiums. It would appear as though in 2019/20 we may be seeing the same - so it begs the question have we gone full circle? 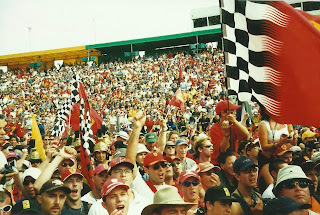 Before we get too in depth with this weeks blog I will commence with a wide and overarching statement and say I agree with Commercial TV rights for any given live sport, so I am not anti Foxtel, Optus or Telstra.

Last week Formula 1 rolled it's new TV subscription service aptly named F1 TV. I have come to the conclusion that I should look into this service. It comes in at $99.00 per year which I thought was ok and was going to foot the bill as Channel 10 are no longer allowed or did not see the value in telecasting F1 live with the exception of Melbourne GP (all races will be summed in in a 1 hour highlights package on the following Monday at 10.30pm). However as it turns out the F1TV Live service is not available in Australia “We have commercial agreements in place that restrict broadcasting in certain territories. We will expand the availability to other countries as time goes on, however there are no guarantees that your country will be included.”

The only service available in Australia is the F1 TV Access Subscription for $42.00 per year which gives you full race replays from the previous season - yes you read correctly the previous year. This is not even in the fine print and I have to be honest almost misleading. Below it clearly states F1 TV Access "Full replays and highlights from every F1 session" *The asterick means it is not applicable to Australia. 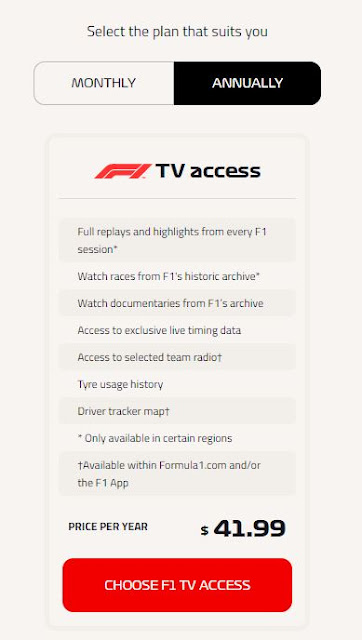 It actually took 4 emails to F1 TV Access to extract out of them what the $42.00 would entitle me to in Australia - "In Australia, you get access to the F1 TV archive (replays from the last season). Rights restrictions mean we can’t offer F1 TV in every country. But we’re always working hard to add more countries each season, so check the F1 TV Content Schedule for updates available at f1tv.formula1.com/en/content-schedule" Out of interest Botswana has the same struggle as Australia.

So in closing Foxtel is the only service where you can watch not only the entire race live but the entire race full stop. Clearly Foxtel have negotiated their position but how long do you think this will be the case in Australia? Would the potential loss revenue from F1TV subscriptions from Australia in future years out weigh Foxtels F1 exclusivity deal?

I am not suggesting F1 should forego it's pre-existing commercial rights but if you are choosing to go OTT you surely need to offer all corners of the Globe something more than a replay that is 12 months out of date?