Trailblazing a new era of Champions in Drag Racing 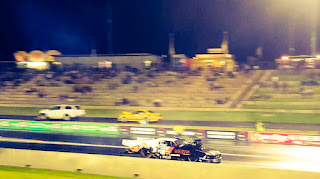 The Winternationals in Queensland this year (2018) marked the end of a long and tough season in the Australian Drag Racing landscape. This year we saw a new era of Champions, two of them in their first season.

Kelly Bettes comes from a Motorsport background that said she still had to work hard, not only get a Top Fuel drive, but to win a Championship in your first season defies belief. She started out in a Junior Dragster and stepped up to run in Modified, however the step into a Top Fueller is a massive leap, not only in skill but in faith, faith shown from the Lamattina Family giving her the drive in their Nitro Top Fuel Dragster.

As the Championship unfolded it was evident Kelly was up against probably one of the most formidable opponents in the Top Fuel landscape in Rapisarda Autosport International's Damien Harris along with Wayne Newby and not to mention "Privateer" Peter Xiberras.

That said Kelly would win the Championship by a mere 2 points but she needed to go deep into eliminations. While she lost the final she had done enough by virtue of winning the Semi Final to secure her place in history. It truly is a magnificent achievement and one I hope she can repeat again.

The recent success in 2014 & 15 of Erica Enders-Stevens winning two Pro Stock Championships in the NHRA and Britany Force's Top Fuel Championship last year have really turned the spot light on females dominance in Drag Racing worldwide. With that in mind I was somewhat disappointed that the greater mainstream media in Australia have not run with Kelly's achievements. This is something that the 400 Thunder, IHRA and Willowbank Raceway should have reached out to their respective mainstream media contacts and promoted this fantastic achievement.

Over in ProSlammer we had the debut of Paul Mouhayet in the 2017/18 Championship. In his own words he was outcast in the Doorslammer/ProSlammer scene given his Turbo orientation - "turbo cars have always been our passion BUT we were rejected". With that in mind they went out and put together a Blown combination and in one season has won the ProSlammer Championship. The Moits Team went out and put the whole shooting match together and left absolutely no stone unturned. The legendary Billy Stocklin was hired to tune the car and the rest is history.

No doubt competing in the entire 8 round series across Australia is a massive financial commitment. Flying crew in from the US 8 times a year is an added commitment the Moits Team clearly knew they had to commit to in order to take on the long standing Australian Royalty of Doorslammer Racing.

I saw their car in March at the Motorplex and it was blistering fast. That evening it set a new MPH record of 260MPH and was running 60's of the bat like Josh Kennedy kicking through the big sticks from the goal square. To be honest it was so fast it looked like it was running on rails. We have grown so use to John Zappia driving the absolute wheels off the Monaro as he ducks and weaves down the track, that when we see cars like Paul's they almost seem unnatural. I am personally looking forward to Paul and his team stepping up next year and the realm of 40's is looking highly likely.

As the 2017/18 season closes it leaves us looking forward to the next season. What new milestones will be broken, will another new comer take out a Championship in their debut and can we get greater Australia to embrace the new era of Drag Racing?


Last year Simon and myself attempted building a car with the end game of getting a birth in Street Machines Drag Challenge. What is Drag Challenge? A 5 day tour of 4 different drag strips covering around 1500kms in between.

In 2018 Street Machines Drag Challenge will be starting from Calder Park in Melbourne before heading up to Swan Hill Dragway, followed by Mildura's eighth-mile Sunset Strip, then back to Swan Hill and finally Calder Park for the finish.

As it would happen we were plagued with dramas and quite frankly took the build down the wrong path and by the time we took the build back to where we wanted to be, we missed the Drag Challenge 2017 deadline.

That said we watched the action from afar as the Street Machine crew posted some great content every evening literally only hours after the racing was completed. The cars are quick with some very serious contenders sending these street driven vehicles well into the 8 second zone then driving them for over 600kms that evening to the next track.

I don't think there is any disputing that Drag Challenge is more of a participant event. Most of the people attending the event are the actual racers, crew members and other extended members of the race teams. While there are spectators that attend the event I would suggest that  their presense would not equate to a large number. However this type of event does not require the 1000's in the stands. I think this event has a much greater marketing value over the net or as the industry now calls it Over The Top (OTT).

To a certain extent Drag Challenge already does this via Street Machine site and their Youtube channel. They also release a Free DVD copy of the event in a subsequent Magazine issue months later which is an excellent production and touches on many of the racers and how they are progressing day on day.

While Drag Racing nationally is going through it own personal turmoil through the 400 Thunder and ANDRA entities, the victim of this stand off has been the marketing of the sport (plus numerous others). That said the fresh appearance of these DC racers in street driven 8 second cars is -
a) Cool
b) Appealing to the under 40 year old demographic
c) Enticing to uninitiated of drag racing

While Drag Challenge does not follow an elimination format with the loosing car exiting the competition, it's own "challenge" (pardon the pun) is continuing on to the next track and that in itself is it's attraction. Capturing that spirited competition and over coming adversity as they make their way through 1500kms of Australia's regional landscape is the essence that in my mind is very marketable.