Bring Back the Biff - Is Verstappen the new Kyle Busch? 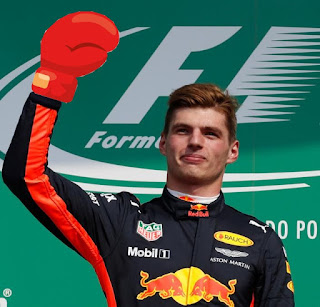 It may seem like a ridiculous question but is Formula 1 ready for NASCAR's Kyle Busch?  Can the North Americans bring WWE to the gentleman's world of F1?
Probably not......not yet, but the tensions from Sundays race in Sao Paulo makes for some great conversation and no doubt a ratings hit for the up and coming Grand Finale in Abu Dhabi.

This blog certainly does not condone violence of any sort - no way, but the spill over at the drivers weigh in after the Race has made for some great TV, dialogue and blogging!!!
The reality is that the incident on track was completely avoidable - one would question why had Estoban put himself in a position racing to unlap himself when no doubt even if he made the move on Verstappen stick he would have been swallowed up by the Red Bull Renault only a few laps later once the tyres on the Force India lost it's fresh rubber appeal.
That said he has every right to unlap himself and the young Dutchman should have just let him go and not get caught up in back-marker games. The incident had most mainstream media talking on the Monday and even made the seasoned AFL punters suddenly become experts in back-marker etiquette.

There is no doubt that hard core passion and rivalry with emotions over flowing  has been missing from F1 for sometime. Max has a serious amount of talent and while the greater media is demanding him to curb his emotion, I am sure the fans can't wait to see him in the lead RBH next year.

On a completely unrelated story, last week Formula E made a huge announcement that they will be live streaming in the UK via various BBC platforms including OTT and "TV Red Button" platform. This is great news for UK residents and no doubt we will see further advances from Formula E team in the coming years with expansion across the planet.

It brings me to my first Blog and my thoughts regarding F1 TV rights. Liberty media needs to move fast in some locations around the world. There is an ever increasing growing demographic which is disconnected from Formula 1. Mark Webber and Daniel Ricciardo has kept some engagement flourishing with the younger generation in Australia and I am sure Brendon Hartley is doing the same in New Zealand, but on a whole the disconnect when Formula 1 went behind the pay wall is growing.

While the Formula E series and premise is not everyone's cup of tea, if you are 13 years of age and it is your only form of accessible/consumable motorsport it is not hard to see Formula 1 will be soon on the decline should they not rethink their telecast platforms.